First time visitor to Barbados Earl Broad, is a wheelchair user who wanted to escape the bitter cold of the U.K.

He decided to take a trip to the Caribbean and sought the advice of his Travel Agent who suggested he stay at the Hilton in Barbados as this was the only island of the three Earl had in mind where he could possibly enjoy an accessible vacation.

Excited about his upcoming trip, Earl decided to do more research so he could plan his stay! He was delighted to discover the Fully Accessible Barbados website and even more so when he saw our beach wheelchair! Right away he sent us an email requesting details  and booked it for three days in advance. Once he arrived he loved the experience so much he booked the chair for another two days because as he said “I live close to sea and I would love to have something like this so I can get into the water where I live, so this is a great experience for me.” On hearing this, we asked if we could meet Earl to learn  about his experience using the chair. During this chat we got further insight into his overall view of his vacation and the island.

“I love the sunshine” Earl told us.  We could tell, he was lightly sunburned from head to toe. “I actually prefer to go into the sea only when the sun is shining full blast”, continued Earl. 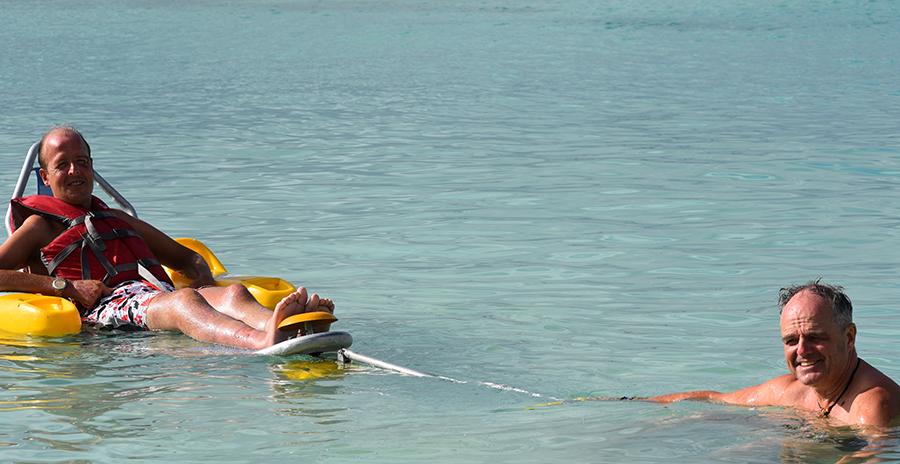 Earl was here with his caretaker John Butterworth who told us “we’re having  a great time, we visited Bathsheba, St. Nicholas Abbey, we took in some Cricket at the Oval, there were three other persons in wheel -chairs there which we thought was great, of course the beach is lovely, we’ve walked into Bridgetown to do some shopping and that was an adventure as Earl had to drive his automated wheel chair in the road since the sidewalks are non existent.”

Earl added “At first it was a bit scary as I was literally driving in traffic, but the people were quite nice and gave me a wide berth, eventually I did get accustomed, but this is definitely one thing I would like to see changed – wide safe sidewalks to roll on into Bridgetown would be a great benefit.” Earl and John would have travelled the road along Bay Street from the Hilton Hotel to reach Bridgetown.

Had it not been for the FAB beach wheelchair, Earl would never had been able to enjoy the ocean as the hotel owned beach wheelchair had been damaged by previous guests and had not yet been repaired. However we are happy to report that upon learning that Earl rented the Beach wheelchair from the Barbados Council for the Disabled, the Hilton  reimburse him for the cost of the rental.

Earl is just one visitor who has been to Barbados with a disability, who despite a couple hiccups was able to enjoy the island but would love to see some infrastructural changes implemented which will make using our island’s amenities easier. Things like wide sidewalks, accessible ramps and slopes, accessible doorways, lowered door handles in public places, more affordable (public) accessible transportation, these are all a few things which play an integral part in making a “Fully Accessible Barbados” vacation possible.

When we left him Earl was headed to Surfside Restaurant on the west coast. John was looking forward to trying their Rum Punch – “Go John, that Rum Punch REALLY packs a Punch!”

Not enough done for disabled – BCD