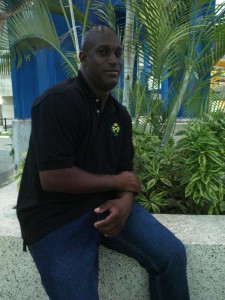 On Monday, July 13, the Law Enforcement Torch Run Final Leg for the Special Olympics World Summer Games set off from the State Capital Building in Sacramento, California. Among the 126 runners from 23 countries, making the trek across California to the Opening Ceremony of the 2015 Special Olympics World Summer Games in Los Angeles, is Barbados Prison Officer Victor Carter.

Carter, who has been a Special Olympics Barbados volunteer since 1995, says “I am so blessed and fortunate to be working with the athletes, who are truly special in every sense…The love that these amazing athletes give you back in return warms my heart and makes me know that this is my true calling.” In addition to his duties teaching horticulture and landscaping to inmates at Her Majesty’s Prison Dodds, Victor Carter is a Special Olympics Barbados bocce official and is currently completing a Special Olympics bocce coaching course for the bowling game of African and Italian origin.

The first stage of the Law Enforcement Torch Run Final Leg started on May 14, when the Flame of Hope, the official torch for the 2015 Los Angeles Special Olympics World Games, was lit at the Sacred Site of Pnyx, opposite the Acropolis in Athens, Greece, formally beginning its journey to the World Games. After a flight to the United States, the flame was carried through all 50 states and the District of Columbia as a part of the historic Special Olympics Unified Relay Across America presented by Bank of America.

At the conclusion of the Unified Relay, the Flame of Hope was handed over to the 2015 Los Angeles Final Leg Team, and it was on its way, for 17 days, to more than 125 cities and towns throughout California, honoring the spirit of the Special Olympics global movement and delivering a message of hope to communities where people with intellectual disabilities continue to fight for acceptance and inclusion. The Flame of Hope will complete its journey on July 25 when the Law Enforcement Torch Run Final Leg team carries it into the Opening Ceremony of the 2015 World Games, and it ignites the cauldron at the historic Los Angeles Memorial Coliseum. The Opening Ceremony, which features United States first lady Michelle Obama and entertainer Stevie Wonder, will be broadcast live by ESPN, and the public will be able to see daily photographs, videos and read reports of the Flame of Hope’s journey online at www.letr-finalleg.org. The Special Olympics World Games will conclude August 2 with the Closing Ceremony, which also will be carried live by ESPN.

Special Olympics Barbados is sending 26 athletes to the Los Angeles World Games to compete in five sports disciplines: aquatics, athletics (track and field), golf, soccer (seven-a-side football) and bocce. In addition to the Barbados athletes, two Unified Partners, Nadia McLennan and Rico Wiggins, will take part in the bocce competition. Unified Partners are participants, without intellectual disabilities, who compete alongside athletes who have intellectual disabilities. Special Olympics Head Bocce Coach Lois Inniss, with the assistance of Victor Carter and others, has been preparing the team for the World Games, which will involve 7,000 athletes from 177 countries.

Corporate supporters and individuals, who wish to help in the effort to send a Barbados team to the Special Olympics World Games, can do so by donating to the “Digicel Road to the World Games Fund” at CIBC First Caribbean Bank, account number 1001111009.